As horse owners we tend to be animal lovers. I don’t know the actual statistics on how many horse owners also have dogs (or indeed any other animal), but in my experience it is quite a high proportion of us. I’m sure that we’ve all had the dream of hacking out with our faithful canine happily trotting alongside, but sadly the reality often is that horses and dogs aren’t always the best of friends. According to the British Horse Society, there has been a great increase in reports of dog attacks on horses recently and I have definitely noticed increased controversy around our canine companions attending equestrian events. I attended both Withington Manor Horse Trials and Gatcombe Festival of Eventing as a spectator this year and at both events there was chaos at least once when a loose dog chased a combination on the cross country phase. This has resulted in a few calls for dogs to be banned from attending equestrian events for everyone’s safety. Olivia Wilmot talked to Horse and Hound about her anger after being chased by a dog at Gatcombe last year, she may not have been hurt but it is hardly optimum competing conditions. Others argue that a few incidents like this shouldn’t be allowed to ruin it for the hundreds of well behaved dogs and their responsible owners who attend these events safely every year. Luckily, I didn’t see anyone actually get hurt, but even one accident would be one too many! 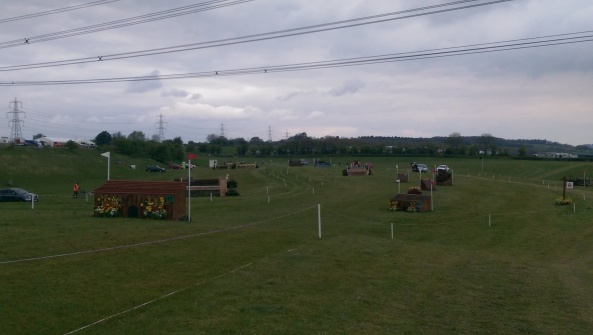 From personal experience, as the owner of a rescued Jack Russell Terrier, I’ve been working hard to teach my dog about responsible behaviour around horses. I still wouldn’t trust him off the lead around them, but he’s basically fine now on the yard and when he sees them hacking while we’re walking. Poor, tolerant Ginge has been brilliant during the desensitisation process. He has come with us on walks and I’ve hacked round the field with my partner leading the dog nearby – we’ve done a fairly good job at convincing him that horses are extremely boring and not worth barking at. 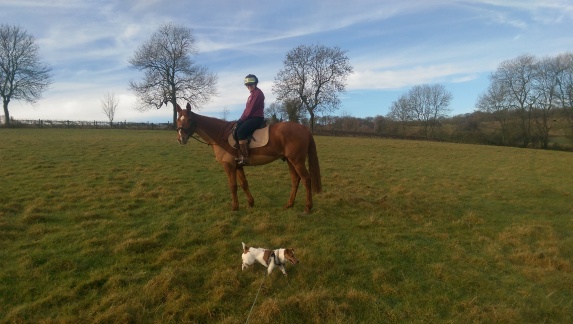 I still prefer not taking him to equestrian events though and generally speaking I just don’t do it. I was talked into giving him a try at attending Gatcombe this year, I had tickets for my birthday and everyone we would normally have left him with was away. His best doggy friend, Barney, was coming along too and we hoped they would just be quiet together. Honestly, I won’t be taking him again. I’m not sure it was an enjoyable outing for either of us. It turns out, despite all our hard work and training there are two things that are just too much for my tiny dog to cope with: clapping and horses galloping. You can expect both of these things at an event and he handled it as many terriers would – with a lot of barking. As a result, I spent the whole day consoling or attempting to discipline the dog (neither worked) and did a lot of laps of the car park or shopping areas to steer clear of the horses and riders. I saw very little eventing and came home exhausted with a headache. Not an experience I plan on repeating.

There were plenty of dogs there, including terriers, who behaved perfectly all day of course. I may be banning my own dog from attending equestrian events, but I don’t think this needs to apply to all dogs. It just needs us as dog owners to act responsibly and decide the best course of action as individuals to make sure everyone has a safe and enjoyable experience. As much as we love to have them with us everywhere, sometimes the best choice for everyone is to leave them behind with a responsible adult. I was disappointed to miss out on the action at Gatcombe to retreat to a safe place with the dog, but I was more comfortable leaving and missing out than stressing him out and taking the risk of causing an accident on the course. I think we’ll be sticking to our quiet country walks in future – I hope other people make responsible choices about what suits their pooches too. 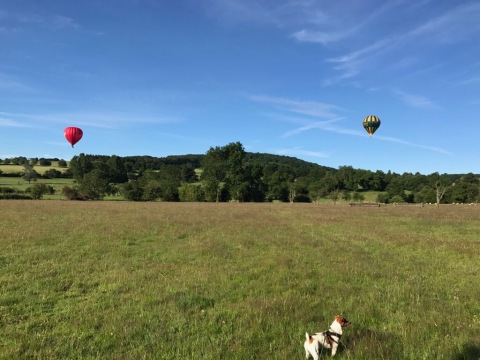 9 thoughts on “Dogs at Equestrian Events”